The spiritual sense of teas is stressed by all ethnic groups of China, a rare occurrence in world dietary history.

The ethnic groups of southwest China live in compact communities in Yunnan, Guizhou, and Sichuan provinces. As original tea-growing areas, these places are rich in tea culture. In particular, when the traditional tea culture fell into decay in modern times in the central plains (comprising the middle and lower reaches of the Yellow River), many tea ceremonies an customs survived on the southwest because the simple folkway and the fact that local culture was deeply entrenched and less severely affected by outside forces or other historical events.

This can be proved by the story about Yao Bai, who planted tea and distributed land among the Jinuos (see picture) of Yunnan Province. Long ago, there lived an ancestress of the Jinuos, whose name was Yao Bai. She not only created heaven and earth, but also decided to distribute land to the ethnic groups. The Jinuos, however, failed to attend the meeting at which the land was distributed, for they anticipated the disputes among the various ethnic groups.

Angry as she was, Yao Bai was afraid that they would be badly off later without land. So she scattered a handful of seeds down from a mountain top. From that time, tea trees grew in Longpa Village, where the Jinuos started to plant and use tea. The high mountain where they lived became one of the six tea mountains of Yunnan provinces. The story about Yao Bai’s planting tea brought a history of tea planting to the first stage of human civilization.

Most tea historians hold that people successively used tea as herbs, food, and drink. The Jinuos have regarded tea as a “cold dish in sauce” to the present day. When you come to their villages, they will collect fresh tea leaves at once, crumple and knead them into soft and thin pieces, put them in a large bowl, and add some yellow fruit juice, sour bamboo shoots, sour ants, garlic, chili, and salt. Then they will ask you to taste their special “cold dish in sauce”. 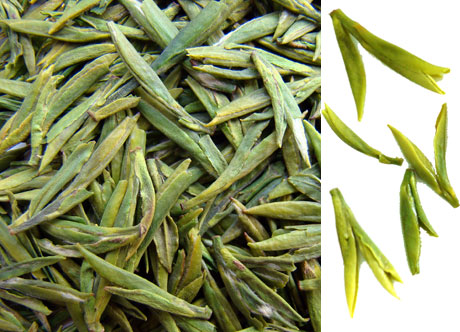 Some ethnic groups, such as the Yi, Bai, Wa and Lahu, have the habit of drinking “roast tea”. This type of tea is roasted in pots or bamboo tubes, or on steel plates. For example, the Lahus roast tea by shaking an earthenware pot on a burning stove. When the tea turns brown, they pour boiling water into the pot. The tea roasted in this way gives off a rich fragrant smell. The Wa ethnic group roasts tea on a thin steel plate, and then puts the roasted tea into a pot and pours in boiling water.

The Bais (see picture here) have a way of roasting tea similar to that of the Lahus except that they add condiments such a sugar and puffed rice to the tea. They also endow the tea with cultural meaning such as sweetness first, bitterness second, and recollections last.

The bamboo tube tea, which is popular among some ethnic group in Yunnan province, is also noteworthy. Perhaps this tea is a transition from loose tea to lump tea by pressing against the cooking utensil while roasting.

By breaking off some dry tea leaves, putting them into a bowl, and pouring some boiling water, the host can treat you to a bowl of tea with the fragrances of both bamboo and roasted tea leaves. From the process of producing roasted tea, we can see the custom of roasting tea left over by the Tang Dynasty, and the original form of “lump tea processed by pressing” as well.

The round tea cake (see picture down), popular in the Yangtze River in the Tang Dynasty, perhaps evolved from the roast tea of boundary ethnic groups, who processed tea with natural and primitive tools of bamboo tubes, while people in the central plains processed tea by pressing with molds. Tea arose in the Yunnan-Guzhou plateau, entered SIchuan Province along the Yangtze River, and then reached Hunan and Hubei provinces through the Three Gorges. People in tea’s original growing area must have had a special method of processing.

One thought on “Tea in China’s Hinterland”