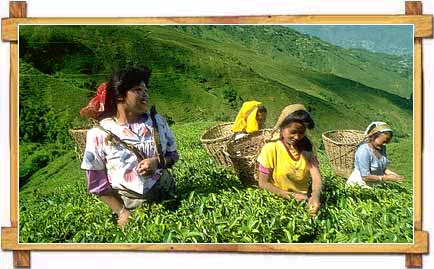 I believe the answer is subjective like People magazine’s 50 “Most Beautiful People”.

Through several thousands years, the varieties and processing methods of Chinese tea have undergone tremendous change from one dynasty to another. The use of some splendid ancient teas declines or even becomes extinct as new teas emerge in every era.

Each new tea excels the last one, similar to how the waves that are behind in the Yangtze River drive on those in front. Every variety of tea has its own rise and fall in history.

First, we should know that the same fresh green leaves, as new material, will turn into totally different processed tea. Modern tea can be divides into six major categories dew to the diverse processing methods, as in the following chart.

The 7th category is scented tea.  It is a unique variety of tea, which doesn’t belong to any of the six major tea categories.

It has a reprocessing process, during which, ready-made green tea, black tea, Oolong of the six major teas will be blended with fresh flowers. The Tea leaves will slowly absorb the scent of flowers (see the picture here) in stillness. After a while, the farmers screen out the flower residue and dry the leaves, and the scented tea will be obtained.

Green tea : The majority of the famous teas in China are green teas. They contain more nutrients and chlorophyll compared with other teas due to the absence of fermentation during processing.

Based on the production method, green teas include the fired ones such as Zongjing and Bi Luo Chun, and steamed ones were popular in China before the Ming Dynasty. Now days there is Yulu of Japan that have a fresh jade-green color.

This type is actually called red tea in Chinese. Full-fermentation causes the red liquor in the cup.

The production is similar to that of green tea, however, it is stacked so that its liquor appears yellow. Famous kinds are Junshan Yinzhen and Megding Yellow Bud.

Remarks : More of them are from Fujian Province in China.

White tea : It is steamed to retain its taste and scent of sunshine. Typical types are Baihao Yinzhen or White Peong.

Chinese White & Yellow teas are light and delicately smooth. They are the least processed tea, undergoing just steaming and drying, leaving it close to its natural state. Recent studies have shown that these teas contains more cancer-fighting antioxidants than any other teas.

Remarks : More of them are from the South of the Fujian Province in China.

Remarks : More of them are from the North of the Fujian Province in China.

Oolong tea : This unique Chinese tea variety, also known as semi-fermented possesses distinctive characteristics featured by both the fermentation of black tea and non-fermentation of green tea. The tea leaves are red at edge and green in the center after brewing.

These leaves are compressed into shapes of bricks, cakes, and bowls, for long-distance transportation and storage.

Pu’er & Dark tea are renowned for its medicinal qualities. Unlike other teas, Pu’er’s & Dark Tea quality and taste improves with age. It’s taste is often described as earthy but some very well aged Pu’er produce cups of incredibly smooth and wonderfully complex beverage.